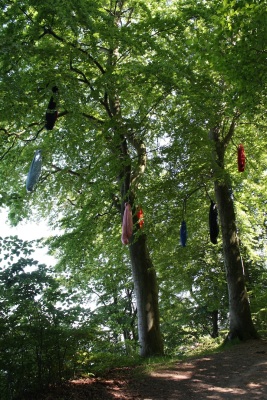 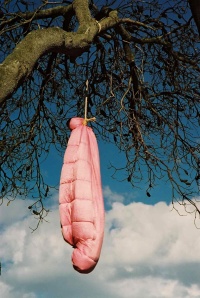 This work was first shown in artsCape Biennial 2010 (in a large dead banksia) at Byron Bay and then Sculpture by the Sea, Aarhus 2011 in Denmark (in a leafy forest). While conceiving the work I was thinking of capitalism’s ‘growth fetish’ and how the pursuit of growth comes at a cost for society. The very idea of ‘getting ahead’ acknowledges that some people will be left behind, left hanging, left out to dry. I used hangman’s noose knots to suspend these embodied bags, and I heard many visitors in passing murmur ‘strange fruit’ – a reference to a song made famous by Billie Holliday, based on a poem by Abel Meeropol about lynchings of African Americans in the US. More optimistic viewers (and children, usually) saw the bags as cocoons. Both sculpture locations were places where homeless people would come to sleep at night, often in sleeping bags. Two bags were stolen in Byron Bay and one was stolen in Aarhus. I hope all three were put to good use.